back to the home page

Arashi: Prince of the Sky 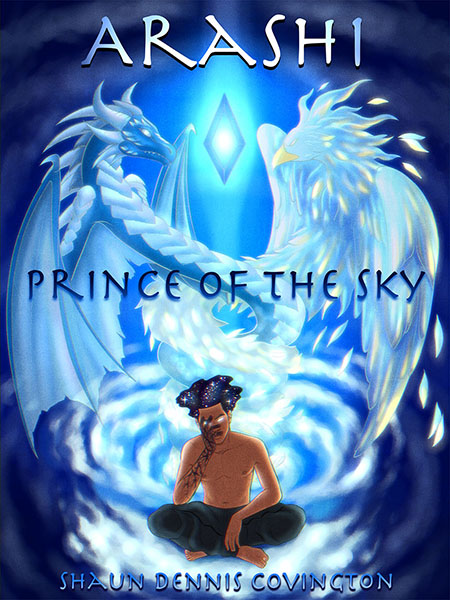 Prince of the sky Audiobook

preview to the chapter 1

Long, long ago, when the earth was still young, humans and spirits roamed the earth together in harmony. The Moon spirit was the guardian of the earth and its inhabitants. The sun would light the earth sustaining life in the day and at night, would cast its light upon the moon so as to shine onto the world. But, when the moon slept behind the earth, hidden from the sunlight, the spirit of Fear lurked in the night. Fear fed off humans and gained power from those who wrestled with their terrors. Fear is a true master of disguise and deception. His sole purpose on this earthly plane is to feast on the life force of humans and perpetuate his essence.

During the age of world war and hate, Fear was most powerful. He sought to destroy the balance between the spirits and the humans to create hell on earth and rule in a waking nightmare. However, there were two powerful spirits able to block his attempts at darkening the world.

The guardians of the sky cleansed the human spirits of their fears. When humans passed away, their souls would return back to the sky. The Phoenix would call upon the clouds and create the cool rain that would cleanse the earth and return the souls back to the human world to be born again. The fierce silver Dragon would pierce the heavens with lightning to give spirits renewed life energy. He is said to be the most powerful force on earth. Without the Phoenix and Dragon, Fear would never be expelled from the human spirit, drowning them in their nightmares, lifetime after lifetime.

After a millennium of defending the earth and warding off Fear, the population of humans grew and became too great to manage. Fear was menacing all over the world growing inside the hearts of people every day causing wars, greed, jealousy, and enslavement. The spirits could no longer live in harmony with the humans, so the moon spirit hid them from the eyes of the people for good and their magic with them. The spirits of the sky stayed hidden behind the moon’s veil until they were needed again.

“His only voice was the strike of thunder and the howling of the wind”. In this graphic tale, Arashi holds within him the spirit of the sky, trying to learn how to be a regular human on Earth but Fear stole his voice, now it’s eating him alive. How will he overcome it? Follow Arashi and his sister Ishara on their journey to defeating the spirit of Fear to save the world from its terrors and discover the dawn of love along the way.

Shaun is a gifted writer with great insightful observations, using personal interactions to illuminate the many colors of his story. This story is about the journey, not just the destinations. The book is most entertaining, informative, strengthening, bonding, and provides a glimpse of an inspiring love story that most of us will never experience in a lifetime. The many characters in this book embark on a journey of self-discovery with surprising results. In the end, they all discover much more than what they set out to find. This is Shaun Dennis Covington's first novel but he has complete control of his story and his style which makes this particular book especially worthy of anyone taking the time to read it.
ALLEN CRAIG HARRIS
Arashi: Prince of the Sky is a gripping vision of an alternate earth that deftly explores both the gritty dark corners of our greatest fears and the dazzling heavens of our most passionate dreams. The adventure is chock-full of mystery and excitement, but it only works because each and every chapter further deepens the exploration of the emotional realities of his characters. Great care is given to self-discovery and personal evolution.
Rick. M
Previous
Next